Types of PTSD and How New PTSD Treatment Research Can Help

Types of PTSD and How New PTSD Treatment Research Can Help 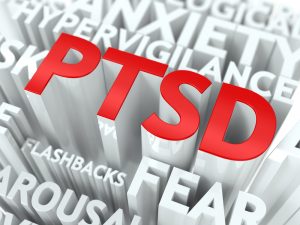 Most people are familiar with the flight-or-fight response to stress in their lives. Someone either flees from the situation or takes it on directly to try and overcome the issue that is affecting his or her life. Fright, a third response, is a feeling of anxiety or fear-based on a real, genuine threat. For over 3.3 million Americans who are battling anxiety disorders or depression, though, the fright, flight or fight response is provoked even in situations that are strictly perceived threats instead of actual ones. Discover more about types of PTSD and how new PTSD treatment research can help.

PTSD, post-traumatic stress disorder, is an anxiety disorder that is still being researched for the effect it has on millions of individuals. PTSD stems from a traumatic event that is outside of what most humans typically experience. A PTSD diagnosis is given when two different situations have happened, according to the University of Louisville Physicians Health Library. “The patient must have directly experienced, witnessed, or learned of a life-threatening or seriously injurious event. The patient’s response is intense fear, helplessness, or horror. Children may behave with agitation or with disorganized behavior.”

What the Condition Could Come From

The condition is most closely related to combat veterans who have served time in a war. However, PTSD can actually influence individuals who have been involved in intentionally harmful behavior, like murder or rape. The condition may also come from long-term situations that caused stress, such as natural disasters, accidents, and experiencing or witnessing a sexual assault.

New research by Dr. Sachin Patel, principal investigator of Patel Lab at Vanderbilt University, has discovered treatments and breakthroughs that could lead to a different way of looking at and treating post-traumatic stress disorder.Patel, an associate professor of psychiatry, molecular physiology, and biophysics, as well as the director of the division of addiction psychiatry, has centered his research around the “role of endogenous cannabinoids as mediators of stress resiliency.” He and other researchers are looking at how plant-derived cannabinoids can impact behavior and stress responses, as the use of medical cannabis is increasing for a number of psychiatric disorders, including PTSD. Understanding his research, though, involves a better understanding of the disorder.

NAMI, the National Alliance on Mental Illness, of Michigan, notes that between 2 and 9 percent of the U.S. population has a degree of post-traumatic stress disorder. There are some individuals with a slight or moderate degree of the disorder. Others, though, are severely affected, with the disorder causing a serious disruption in their day-to-day life. Additionally, while anywhere from 15 to 30 percent of Vietnam veterans suffer from PTSD, veterans are not the only ones affected by the condition.

Individuals who were present at the Sept. 11, 2001, attacks, the 2013 Boston Marathon, or the 2016 attacks in Orlando or Paris have been diagnosed with post-traumatic stress disorder.

Most people who have been involved in events of these nature may experience a level of trauma in the days and weeks following the incident, but some individuals are unable to “shake it off,” as people will advise them to do. Some individuals have suffered physical brain injuries, especially in combat, that researchers say can cause PTSD. Meanwhile, others suffer neurological and nervous system changes that can spark severe depression, anxiety and self-medicating addictions.

The Anxiety and Depression Association of America notes that there are three primary kinds of symptoms related to post-traumatic stress disorder, each of which causes a different kind of response and type of PTSD.

Another Type of PTSD

The U.S. Veteran’s Administration notes that a fourth type of PTSD exists, and it presents individuals with a greater amount of negative thoughts and feelings than someone experienced prior to the traumatic event. Each of those symptom categories includes a variety of different sub-symptoms that can range from witnessing or experiencing a traumatic event; distressing and involuntary memories or flashbacks of the event; non-stop fear, guilt, anger, shame or horror; or a marked change in behavior.

Loneliness and a Safety Net

Individuals experiencing PTSD may often feel alone, so it’s important to seek help from a mental health provider who can suggest different treatment and coping techniques should the symptoms and conditions warrant a diagnosis of PTSD. The disorder can cause individuals to feel additional anxiety, addiction, depression or self-harm. PTSD can affect a patient’s relationships, employment, and physical health.It’s also good to provide a safety net for individuals and friends who may be at a higher risk for developing PTSD. Staying vigilant can help friends and family make note of any character or personality changes that can indicate the presence of PTSD.

Many medical and mental health professionals have tried various treatment options for PTSD, and each one offers differing levels of success.

The Most Common Treatment

Conventional behavioral therapy is the most common treatment, and it is widely regarded as the most effective when counseling patients with PTSD. The therapy is used to help an individual think about and work to change their mindset. The idea is to think about the traumatic event and the results and impacts it has on the person’s current lifestyle. Professionals at the U.S. Department of Veterans Affairs have found three types of this therapy to be especially beneficial: cognitive processing therapy, prolonged exposure therapy, and eye movement desensitization and reprocessing.

Medication is also used to treat the symptoms of PTSD by helping to balance the chemicals in an individual’s brain. For example, professionals have found selective serotonin reuptake inhibitors like Celexa, Prozac, Paxil and Zoloft to be effective. Some individuals, though, would prefer to find a more natural and holistic treatment option that doesn’t include prescription medication.

At the Patel Lab at Vanderbilt University, Dr. Patel and his colleagues discovered that inhibiting the COX-2 enzyme in a mouse can reverse the pathological anxiety behaviors that were caused by exposure to traumatic stress. They note that the findings indicate that COX-2 inhibitors, then, might help to treat PTSD.

Other Studies and Findings

Other studies involving Patel show that several different factors, including the endocannabinoid system, plays a significant role in psychiatric illnesses caused by stress. He has noted that while he sees no proven medical value to the marijuana plant, Patel’s patients have reported lower levels of anxiety after using medical marijuana. Because of that, he is working to find other drugs that can have the same effect without the need to smoke marijuana.

Patel, a doctor of chiropractic at the Living Proof Institute in Ohio, has a passion for functional medicine that has led to a greater investigation into the interconnectedness between whole-life health and wellness. As a result, he believes that people can achieve greatness through health since it’s one of the most important components that allows individuals to serve their families and communities. Through a consultation, Dr. Patel can help to get to the absolute root of an individual’s health issues and put together a plan that works to restore your life, health, and vitality. This plan includes facing the possible repercussions of post-traumatic stress disorder. His functional medicine treatment can make an impact, as nutrition plays an important part of a person’s ability to cope with and manage the symptoms of PTSD.

Individuals experiencing depression often have less-than-ideal-diets, ranging from starvation to binging, restricting food, or sustaining on foods with little to no nutritional value. To give a person’s brain the fuel it needs to overcome the symptoms and results of PTSD, individuals should consider the importance of glucose, a simple sugar in fruits, vegetables, and grains. Glucose helps your brain to process and operate each different system at the same time, and a lack of the fuel causes certain systems to operate optimally.

A healthy diet, appropriate activity, and exercise levels that lead to restful sleep and consultations with mental health and medical professionals can play a significant role in the brain’s ability to recover from and cope with the symptoms of PTSD.

It is important to remember that each person’s abilities and symptoms are vastly different. Recovery requires persistence and patience, as different systems require a different amount of times to regulate and process the new lifestyle for a healthier way of life.

Thank you for reading our blog! How can we help you? Contact us today.